Berhampur: A ‘scrap guitar’ designed by ITIans of government-run Berhampur Industrial Training Institute (ITI) and made up of metal waste items has entered the Asia Book of Records. 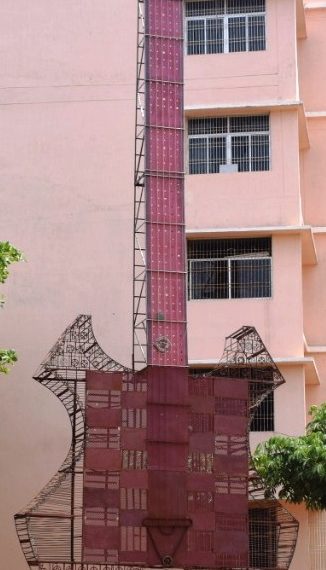 “Our students could see art in scrap. Their latest artistic creation out of waste materials earned the institute a place in the Asia Book of Records. This achievement is pride for both our institute and our country,” said principal of the ITI Rajat Kumar Panigrahy.

About 150 students of five trades – fitter, electrician, welder, turner and painter – came together to make a 70 ft tall, 25 ft wide guitar using the metal waste material left behind by the Titli and Fani cyclones. It took the team 22 days to curate the sculpture that is being currently decorated with LED lights for illumination.

Materials used for sculpting the guitar are GI overhead water tanks that were damaged during natural calamities, pieces of iron and angle bars collected from the workshops of students from turner, wielder and fitter trades, said Panigrahi.

Aiming at creating awareness on recycling of waste materials among the public, the students have been creating gigantic sculptures from scrap. Their oeuvre include a 33-ft giraffe, 22-feet fish, 18-ft science fiction character ‘Predator’ from the namesake Hollywood flick which have been installed in the ‘Scrap Museum’ inside the ITI campus. The ‘Predator’ sculpture weighs around 500 kg.

“The students are now making an Olive Ridley turtle from waste materials to create awareness on protection of the endangered species. It will measure 10 ft in height and 15 ft in diameter,” Panigrahi said, adding the institute plans to open an open air park to showcase 15 sculptures made from the scrap.

The Scrap Museum inside the campus has always been a hit with visitors since its inception in 2017. Some of the scrap artefacts showcased in the museum are a table lamp made of motorcycle parts, a flower vase with broken bathroom fittings, a wall clock made from damaged motorcycle parts and bicycle chains and elephants made with waste iron powder from the ITI workshop. An exhibition on the theme ‘recycling of scrap’ was organised in the museum last year, where 200 such artifacts were displayed.