Kolkata: Two days after his uncharitable remarks on Nobel winner Abhijit Banerjee generated a storm, BJP national Secretary Rahul Sinha Sunday again attacked the Nobel Prize for Economics winner, challenging him to implement his economic thoughts even in one village instead of speaking against the Prime Minister or the Union Finance Minister.

Accusing Banerjee of using his Nobel award for his “political interest”, Sinha also made indirect references to another Nobel Prize winner in Economics Amartya Sen – a bitter critic of the Narendra Modi-led NDA government. Sen won the award in 1998.

“If somebody tries to use the Nobel award in his political interest people don’t find it in good taste.

“We have seen it in case of this Nobel prize winner (Banerjee), as also another one (Amartya Sen). We have no objection if they present their thoughts about the country’s economy before the people, and there is a debate on it. But if they insult somebody, make filthy utterances about the Prime Minister, that’s not decent,” Sinha said.

Sinha reiterated that people have thrown away the NYAY or Nyuntam Aay Yojana (Minimum Income Guarantee programme) – the flagship social welfare programme of the Congress in its 2019 Lok Sabha election manifesto.

“He has worked on NYAY. But what was the income? People of the whole country threw it away. The scheme, for which the Congress had consulted Banerjee, promised to give Rs 72,000 annually to each of the 20 per cent families in poorest of the poor category. The Congress, however, lost the general election.

Banerjee, however, has said he only provided information and his role was not to make NYAY. He also described the scheme as “not particularly well-designed”. Sinha said that instead of speaking against the Finance Minister Nirmala Sitharaman, “if he (Banerjee) has any alternative, he should send it to the Finance Minister, to the government”.

Sinha dared Banerjee to implement his economic thoughts in at least one village.

“Instead of talking big on economics, making such big claims on economy, let him implement those thoughts in one village. Then we will listen to him,” he said.

On Friday, Sinha had remarked that people whose second wives are foreigners are mostly getting the Nobel Prize, and wondered whether that is the criterion for getting the award.

Banerjee won the award this year jointly with his second wife Esther Duflo – a French-American economist – and fellow US professor Michael Kremer. 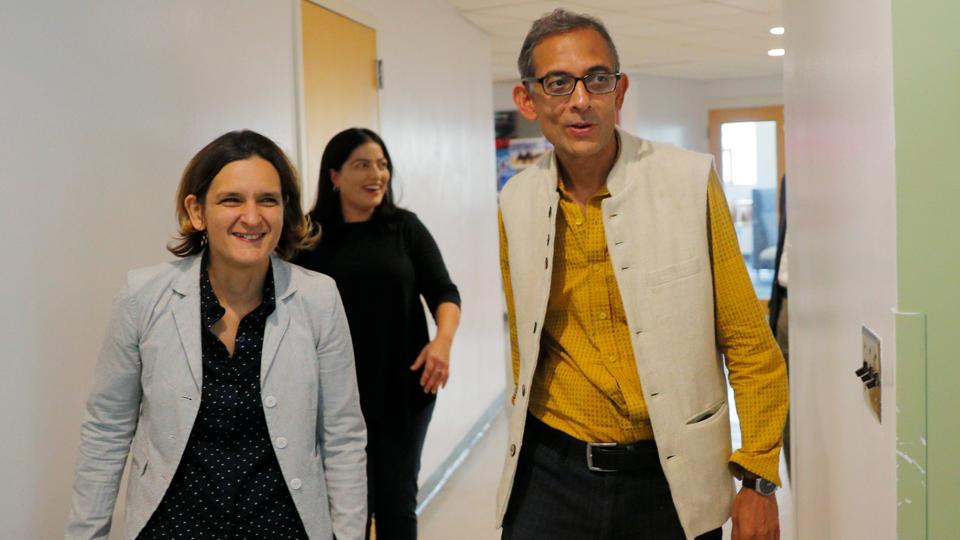 Announcing the Nobel Prize in Economic Sciences, the Royal Swedish Academy of Sciences said the research conducted by Banerjee, Duflo and Kremer has considerably improved the ability to fight global poverty.

Born in Mumbai in 1961, Banerjee is one of the world’s leading development economists and is presently working as a Professor of Economics at the Massachusetts Institute of Technology (MIT).He has, in the past, never minced words in criticising the economic policies and other actions of the Narendra Modi-led BJP government at the Centre. Even after winning the Nobel, Banerjee expressed concern over the condition of the Indian economy.