New Delhi: Major opposition parties, including the Congress and the DMK, Tuesday stormed out of the Lok Sabha over the political crisis in Karnataka where several Congress and JD-S MLAs have quit, putting the coalition government in a crisis.

The House was plunged into an uproar when a Congress request to raise the issue during Zero Hour was not allowed by Speaker Om Birla.

Congress and DMK MPs immediately trooped near the Speaker’s podium raising slogans like “we want justice” and “stop dictatorship”. Congress leaders, who persisted with their demand, first protested from their seats.

The Speaker pointed out that he had allowed the Congress Monday to speak on the issue. “But don’t give out an impression outside Parliament that it is a place for sloganeering and showing placards.”

The Speaker, who had earlier warned the members amid protests, urged them to take their seats, adding that he had been giving opportunities to members to speak out of turn. 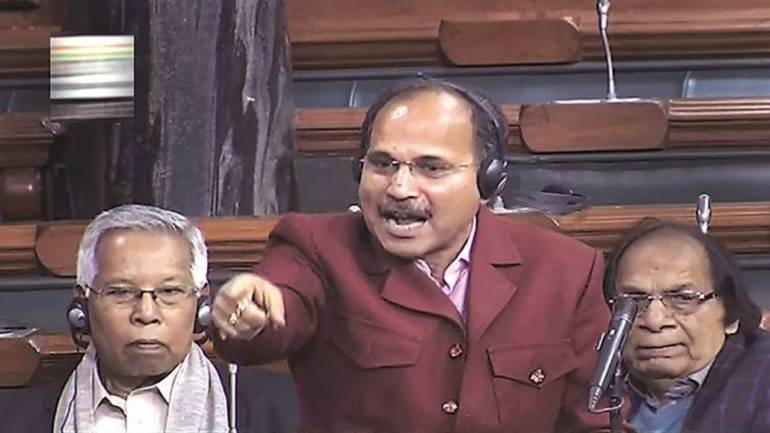 Birla said the House belonged to all members and there should not be any sloganeering. “Debate with each other but there is a need to put an end to sloganeering and raising of placards if everyone agrees.”

He said the proceedings of the House were widely watched and the members should not resort to sloganeering.

Congress leader Adhir Ranjan Chowdhury hit out at the government and asked it to stop “poaching politics”.

The Congress has accused the BJP of destabilising the Congress-JD-S coalition government in Karnataka by luring its MLAs to cross over to the BJP. “The opposition has a major role in taking forward the country… We will raise the issue. It is the government’s prerogative to take the decision. We are doing our job. Poaching politics should be stopped,” Chowdhury said.

He also alleged that after Karnataka, the ruling party could next target the Congress government in Madhya Pradesh. The MP justified the Congress resorting to sloganeering by referring to the remarks of BJP leader Arun Jaitley that disruption was also a legitimate strategy of the opposition.

“We are fulfilling our role, they should fulfill theirs. Senior leader Arun Jaitley has said disruption is also a tactic, we have taken a lesson from him,” he said.

Chowdhury said “democracy was in danger” due to the actions of the BJP-led government and reiterated that “poaching politics should be stopped.”

Rejecting the BJP’s claims of non-interference in the Karnataka developments, he asked how vehicles and planes were ready for rebel legislators.

Amid Congress protests, Parliamentary Affairs Minister Pralhad Joshi said the members cannot give notice on a matter that had already been raised in the House.

He said the BJP does not have a hand in the Karnataka developments and the Congress was facing problems due to the resignation of Rahul Gandhi as the party president. Joshi said Congress members had raised the issue of the political crisis faced by their coalition government Monday and Defence Minister Rajnath Singh had responded to it.

He urged the Congress members not to disturb the proceedings. Before the government could respond on the issue, Congress, DMK, NCP and National Conference members trooped out of the House. But other opposition parties like the Trinamool Congress and the BSP did not join the walk out, displaying disunity among non-BJP ranks.

It was the first time in the 17th Lok Sabha that the Congress staged a walkout. Responding to the allegations, Rajnath Singh said that the Congress failed to handle the political crisis in Karnataka and termed the issue an “internal matter” of the grand old party for which he said Parliament was being disturbed.

“What is happening in Karnataka is Congress’ internal matter. But they have failed to handle the problem of their own house and are trying to disturb the proceedings of the Lower House of Parliament,” he said.

Singh, who is Deputy Leader of the House, said that the Congress was raising the issue again after it had raised it Monday and was misusing the opportunity given to it.

The crisis in the H.D. Kumaraswamy-led government in Karnataka deepened further Tuesday with one more Congress MLA resigning, taking to 17 the number of legislators of the ruling Congress-JD-S combine who have quit over the last few days.